Last week I’ve conducted a survey, asking you guys what adminpanel solution you’re using for your projects. Time to look at the results, make some conclusions and… present to you first draft of upcoming new QuickAdmin.

First thing first – survey results. It has actually only one mandatory question – see your answers here below: 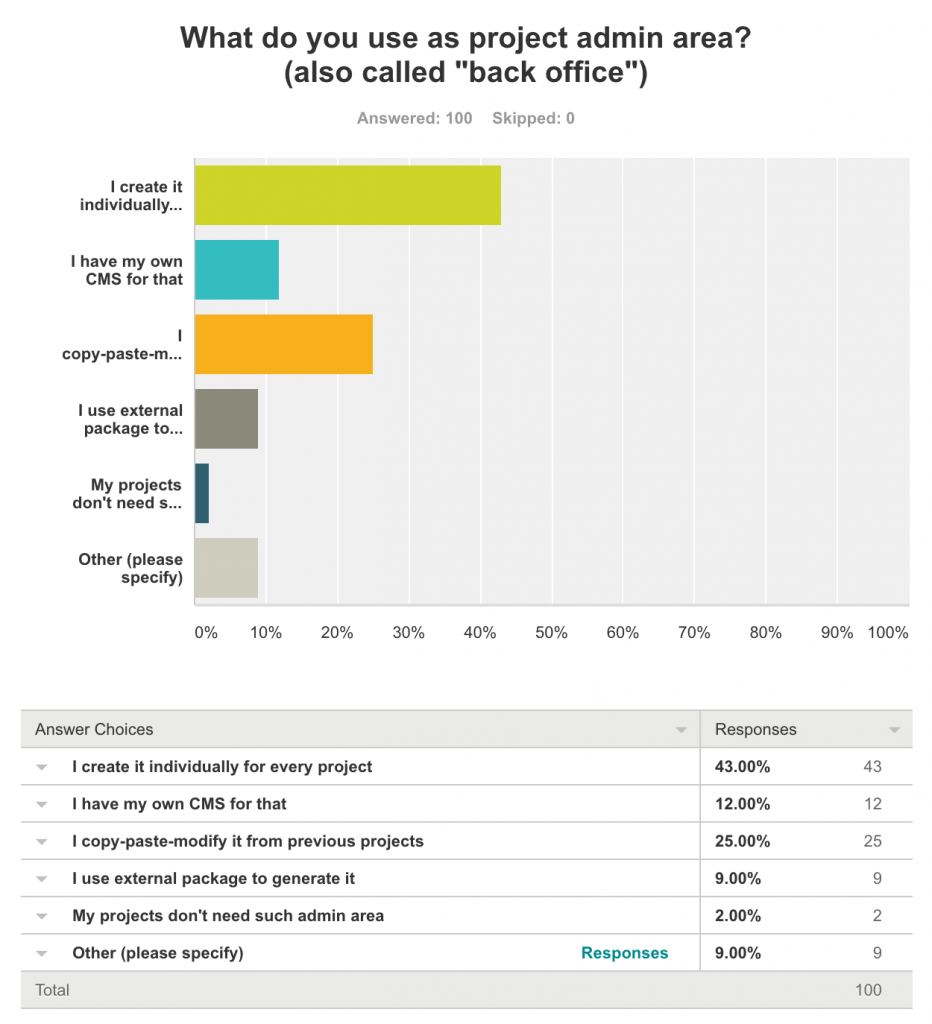 Yes, 100 people actually took part in the survey. In fact, there were more of them, but I had to stop at 100, because that’s, apparently, maximum for SurveyMonkey free plan. But I think it’s enough data for some rough conclusions.

So, what do we see here and what are the takeaways?

Speaking of external packages, here are the comments from “Other” option – will quote them “as is”:

Ok, so a few more tools mentioned – and some of the answers can be moved from “Other” to “External package” option. Quite surprised to see October CMS here, but I guess people actually work with content-based projects on Laravel (I would question why not WordPress then).

I kinda lied about only one question – there was an additional optional one, just as a free-form field with a question:
“Any additional comments on the admin area building process? What package/service/tool would make this process easier?”

Let’s see what we’ve got here – 22 out of 100 actually responded, quite a lot! Will mention some of them here:

Ok, some more packages recommended and some opinions stated. Yes, by the way, I do agree about bloated themes – the same Metronic mentioned when unzipped is over 1 GB!

And some of the reasons mentioned actually moved me towards creating my own simple package. The key here is “simple” – other packages I’ve checked have a lot of additional steps. Either have their own language/syntax, or have 15-20 steps to make it all work etc. So I thought – come on, it should be simpler. That’s why presenting to you…

After some discussions on this post and consulting a few experts, decided to move on with this project. A short recap – QuickAdmin 1.0 was our internal package within the team, QuickAdmin 2.0 was released as a Laravel package, and now it’s time to make another move – towards a “service” version.

It’s actually still in progress, but today I want to show you a “teaser” of how it all works – please give your opinion on whether you would use such thing, and if you have any suggestions before the final release, which should be in upcoming weeks.

Ok, so these are the thoughts after the survey, and an announcement of what’s coming. Any additional thoughts on your end?

Migration index too long? Choose the name yourself!

Filtering query results with different conditions on the same page

From Google+ API to Google Sign In with Laravel Socialite