One of the most popular questions I'm getting as a developer and team leader is what is my/our hourly rate for web-development. Instead of answering "it depends" every time, I decided to create a mini website with an answer. Might be useful not only to myself but to you too - whether you would show it to your clients, or you are a client yourself.

Why there's no such thing as "average hourly rate"

The problem is that a lot of clients tend to measure the cost of web-development by time. How many hours/days/weeks spent on the project. But if you think about it, it's wrong on many levels:

And a lot more reasons why hourly rate is wrong. But the biggest problem is that clients think that developer for $10-20 per hour is cheaper than $50 per hour. In terms of simple math, it is - but in reality more qualified developer will deliver faster, with less bugs and also will provide business knowledge in order for you to succeed. Which then allows you to launch and start earning money quicker, which means you earn more. Doesn't it make sense?

And so we've put up a calculator to demonstrate this in reality - what processes you're getting for different hourly rates. 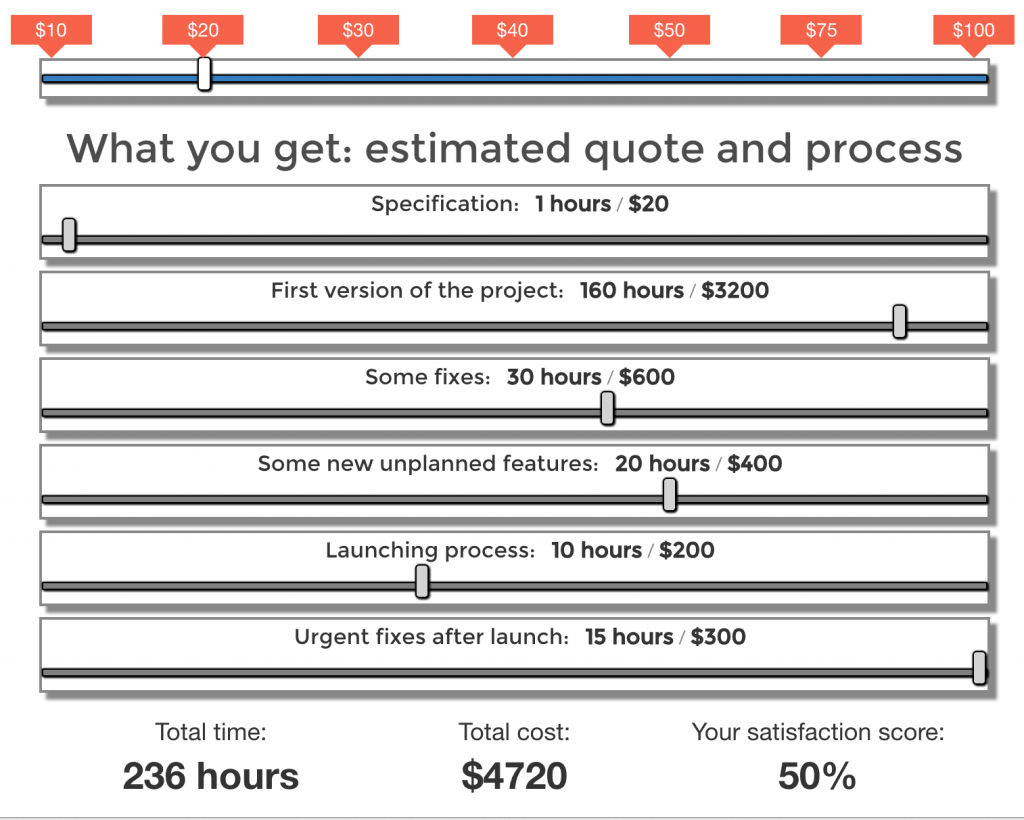 The numbers, of course, are not exactly accurate, we didn't plan them to be precise. The goal here is to show the logic of why more expensive developers are not that expensive in the long run.

Same logic actually applies to a lot of fields in life. For example, hardware - for the price of new iPhone you could buy 2 or 3 cheaper phones. But they would have less quality, less functions and would break much faster, therefore considering the fixes (or buying a new phone) it might not even be cheaper.

Ok, so how to price projects if not hourly?

I'm glad you asked. I hope by this point you agree that hourly billing is wrong for both sides. Now, let's get into the real world - what makes sense for both client and a developer?

To spend more time on actually evaluating the project.

Simple, right? I'm actually surprised so few people do that.
Typical (wrong) start of the project:

And it starts going wrong at that moment where the estimate is rushed. I really like the article by Christopher Hawkins, called Dear Client: Stop Asking For A Ballpark Estimate. He is talking about "sitting down" with a client for a discovery process - where both sides talk about the details upfront and try to evaluate it more accurately.

So, the (more) correct way of pricing the project is this:

That estimate of price can be, actually, based not only on time that it takes. There's a thing called value-based pricing, which is becoming more and more popular. The point is to try to evaluate the profit amount that the client can make potentially, and then that profit becomes the ultimate goal, and from that profit developer takes the percentage and that becomes the price of the project. It actually makes a lot of sense because then a developer becomes like a business partner and aims at the ultimate goal as much as the client.

So, if you are dealing with hourly-rate pricing, from whatever side, reconsider it and try to evaluate the total cost/scope/goal instead of tracking time. And, also, don't think that smaller/bigger hourly rate directly means cheaper or more expensive project. The formula is much more complicated.

Do you agree with the thoughts? And with the calculator?

Link to the calculator once again: DeveloperHourlyRate.LaravelDaily.com