There are a lot of courses and articles about coding but much less about putting it in production. With a lot of questions asked, I decided to write this ultimate (hopefully) guide to deploy Laravel projects.

In this article, I will assume two things:

Notice 1: please take this article as personal advice but not 100% accurate process. Every team have their own way to deploy projects, so you may read different advice elsewhere. Notice 2: this article was written in October 2018 and updated in August 2022, check for any updates to software and Laravel/PHP versions at the time you're reading it, IT world is constantly changing.

Enough formalities, let's dive in. In this article, we will cover these steps:

To be honest, I don't want to focus on this step too much, cause server preparation is not part of deployment. But these are the parts that you need to prepare, in short:

Part 1. Create/purchase your dedicated server. In case of Digital Ocean it's called Droplet, Amazon AWS call it EC2 instance etc. Part 2. Install LEMP or LAMP stack. LAMP/LEMP stands for LInux (comes with server), web-server (Nginx for "E" and Apache for "A"), MySQL database and PHP. A lot of server providers offer this as a one-click install - see Digital Ocean example below: 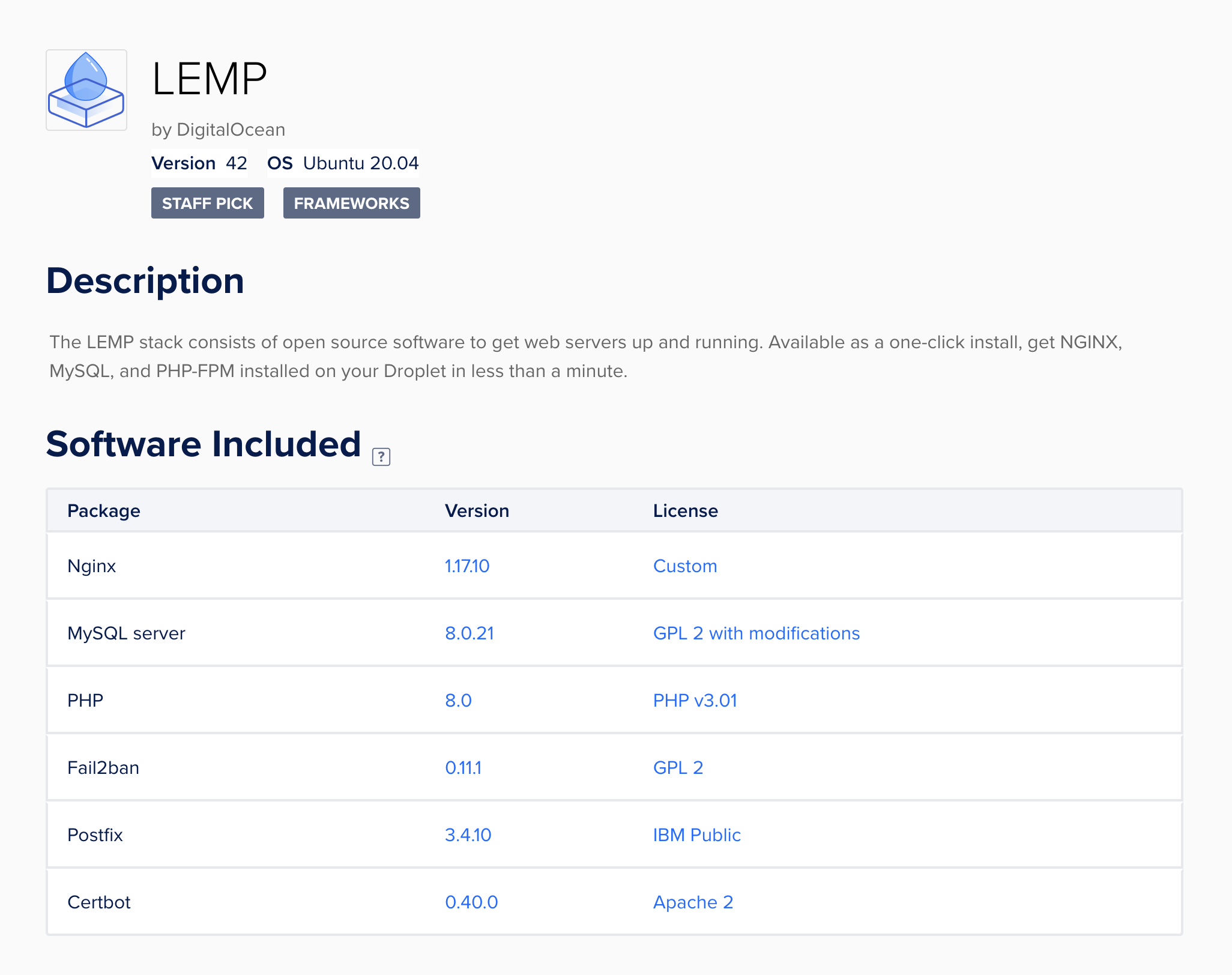 Notice: Linux-server is the reason I advise to use Linux environment on local computer, too. This way you get used to configuration. But don't worry, you don't need to install Linux or buy specific new computer - it all can be emulated with Laravel Valet or Laravel Sail. For Windows users, I've also heard good things about Laragon.

Part 3. Configure SSH access for yourself. You will probably deploy changes by SSHing to the machine and running commands like git pull, php artisan migrate etc. Forget uploading via FTP, if you still do it. Learn more about users/privileges for SSH access in this Digital Ocean article.

Part 4. PHP and Dependencies for Laravel. At the time of writing this, Laravel latest version is 9 with these requirements:

Part 5. Install/configure composer. You do want to run composer install command on the server, right? Follow the instructions from the official GetComposer.org website.

Part 6. Install/configure git. Putting the code to the server will work by pulling it down from git repository. Probably this official instruction will help.

Part 7. Configure MySQL. You need to create a database specific for your project, and a user to access it. You may create a separate user, granting only specific privileges. Digital Ocean have article on it, too.

Part 9. Point the Domain to Server. our new server probably has some IP address given to you by Digital Ocean (or other provider), so now you need to go to the page of your domain configuration (where you've bought the domain) and change its DNS records, specifically A record to point to that new IP address. Here's article on Quora about it.

Ok, at this stage, if you've completed all of the above successfully, you have your server ready. Not that simple, huh? To avoid all that manual work, I totally recommend using Laravel Forge - it prepares the server for you, with all the correct settings, in just a few clicks. If you work with multiple clients, totally worth $19/month (this is the most popular plan price at the time of writing this article). Also, you support Taylor Otwell and Laravel by using Forge.

Step 2. Initial launch of the project

Now, as we have server ready, let's put the code there.

Part 1. Putting the code to the repository. Choose the system you want to use - GitHub, Bitbucket or Gitlab. Then create a repository there and push your code from your local computer.

Here's a sample sequence of commands from Github, from the point of initializing Git repository:

Let's take an example of totally fresh Laravel 9 project. Now, if you pushed your code to Github, your repository should look like this. 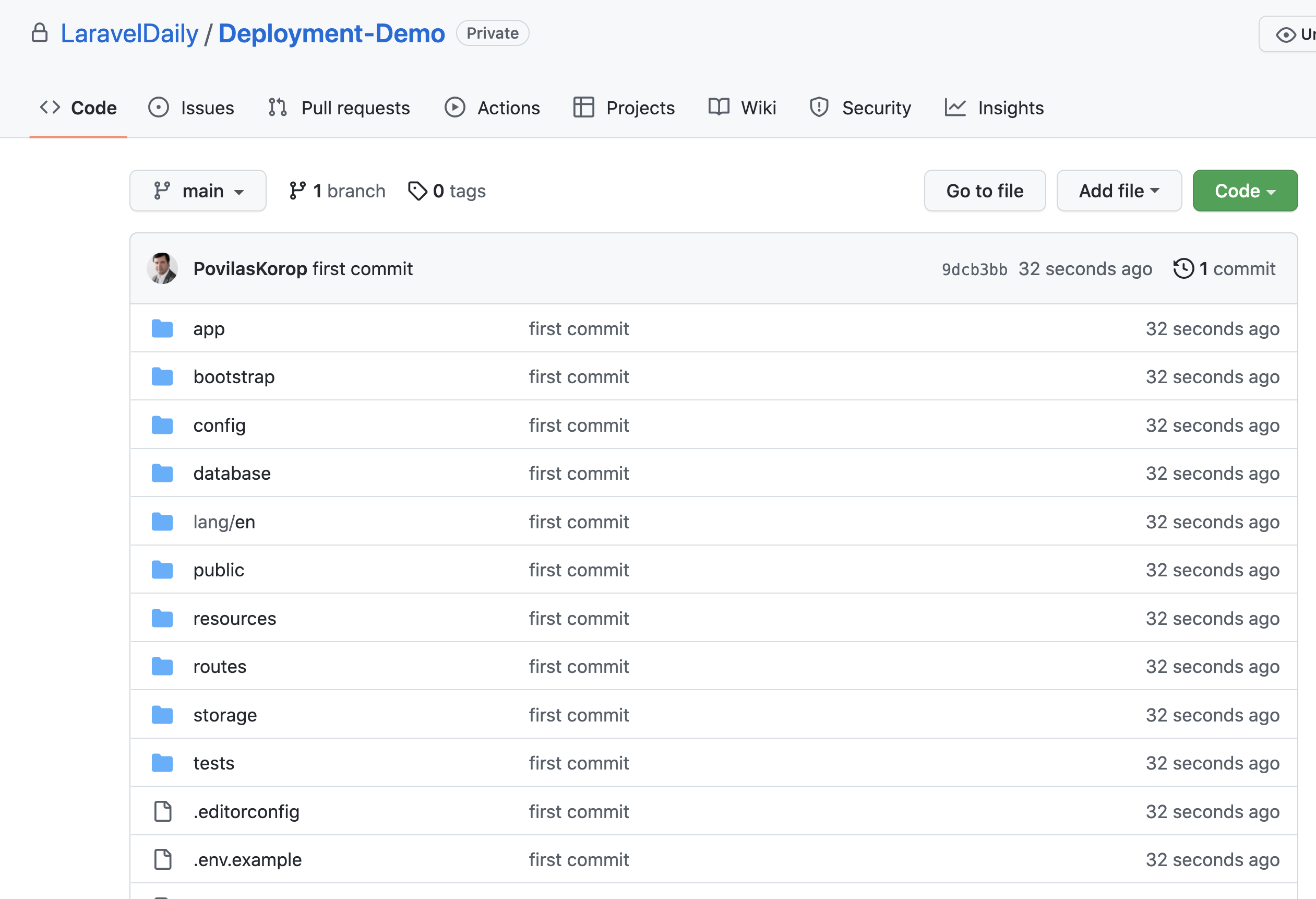 Part 2. Cloning repository to the server. We need to SSH into our server, navigate to the folder prepared for the project, and launch git clone command:

Keep in mind that your server should have access to the repository, if it's not public. You can do that by specifying your username and Github personal access token (not password! Read more here) every time you're asked, or you can set up the access following these instructions.

After cloning is successful, we should see the files downloaded to the server.

Important thing about public folder - make sure that your Web-server configuration points to public folder correctly, and your full repository is cloned in one folder above, not into public. Here's an example from Nginx config:

Now, we need to configure our environment.

Laravel comes with a file called .env.example, with all typical configuration values, here's its version from Laravel 9:

But for your server the values will be different, so we need to do two things:

You can change a lot of variables, but the main ones are these:

So set up your app URL and database credentials. Everything else can be edited when you actually need it.

Part 4. Composer install. Let's run this "magic" command. On this step, you may encounter some errors if some packages are not compatible with your PHP version or extensions. So check for any messages.

In case of success, it looks something like this:

Part 5. Generate application key. We need to run this command:

It generates a random key which is automatically added to .env file APP_KEY variable.

Part 6. Migrating DB schema. Do you have any database table to migrate? Then let's launch this:

Part 7. Seeding data? If you have set up your database/seeds , this is probably the time to run them:

To speed up the process, you may run two commands above as one: 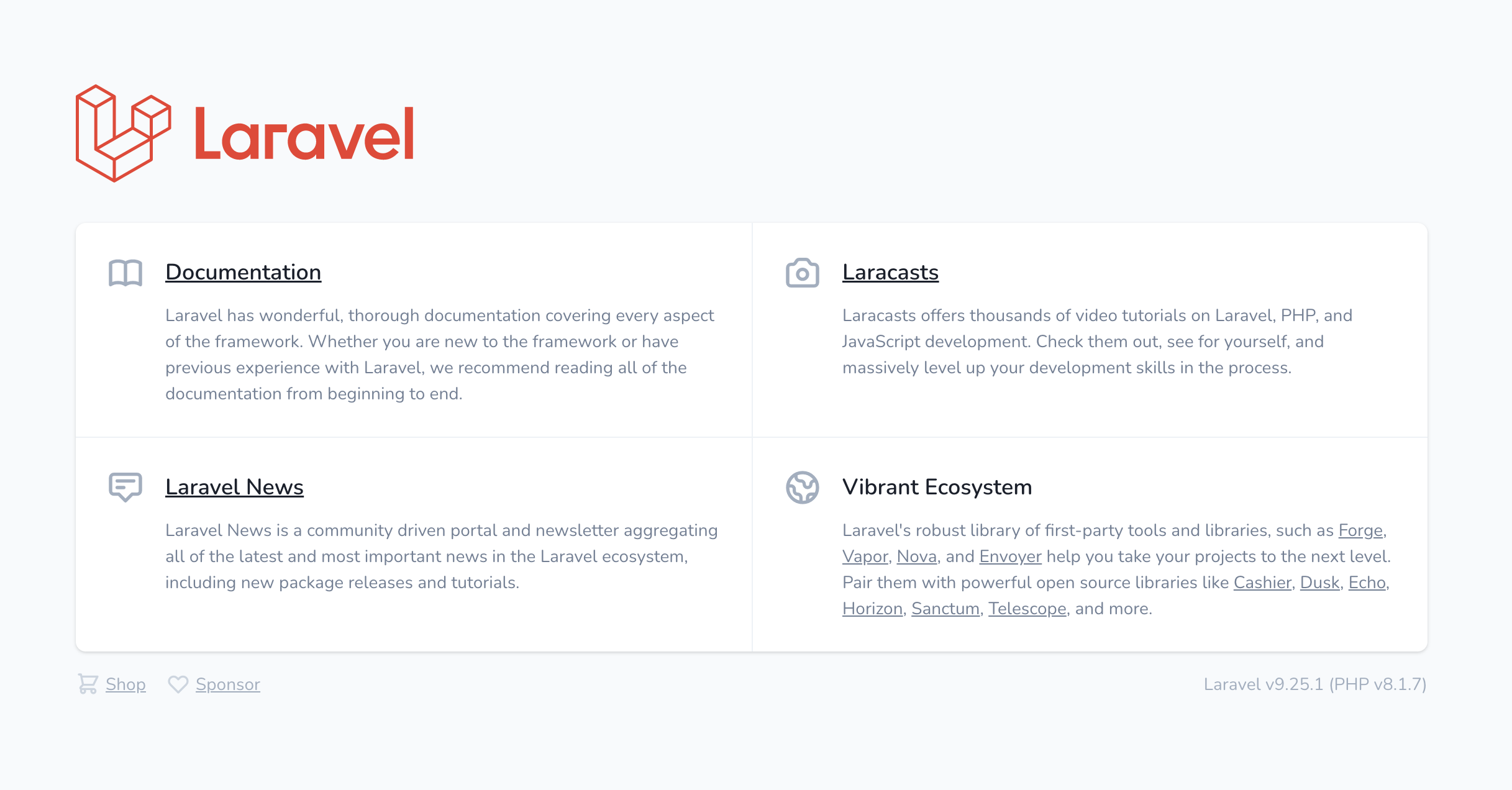 Congratulations, if you've reached this far, you have deployed Laravel project to your server!

But that's not the end of the article, let's see how to work with this project and deploy future changes.

Step 3. How to deploy new changes

Ok so we have the first version of the project deployed. Now, how to deploy the changes in our code? Also, how to do it without breaking anything and with least amount of downtime possible? Here's the plan:

Part 1. Artisan down. There is an Artisan command to get all the website "down".

If you launch it on the server, the whole website becomes unavailable, and then you can do any deployment actions, and your visitors won't interrupt you. Otherwise you're at risk the someone will change some database data in live mode, which may even break your deployment.

After this command, your visitors will see this page (in Laravel 9):

To get the site up and running again, after all the deployment actions, run this command:

Part 2. Git pull. You need to pull the latest version of the code to the folder. It's simple:

You can add more parameters like branch, but we will be talking about branching strategy a little later in the article.

Important notice: don't run "composer update" on a live server. It will take a lot of time (a few minutes) and will break repository consistency.

This is how you install a new package to the project:

Part 4. DB migrations. If you have any database changes in database/migrations, run this:

Actually, run this anyway, even if you don't have changes. It won't error, just will say "Nothing to migrate".

But important notice: don't edit the migration files if they are already in repository, for every change add a new migration file.

Part 5 (optional). Restart FPM. This step is not always necessary, but will restart PHP and kill any processes that have been started. For the latest PHP 8.1 version, at the moment, on Ubuntu, run this:

Part 6 (optional). Restart queues. If you have any Queue mechanism running, it is advisable to run this:

Part 7 (optional). Clearing cache. Again, this step may be unnecessary, but if you're using Laravel cache, this command will clear it:

Part 8. Up and running again! And that's it, let's get the site working again.

To sum up, here's an example sequence of commands in one of my projects:

You probably think that it takes a lot of time to (properly) deploy the changes. While you're running various commands, and investigate potential issues, visitors may be waiting for the site to be working again. For minutes. Not cool.

To solve this problem, people came up with a solution called zero-downtime deployment. The principle is pretty easy:

There are a few tools that arrange this zero-time deployment for you, with ability to rollback to a different folder, logging the process and report about errors. My favorite is the official tool by Taylor Otwell called Laravel Envoyer. 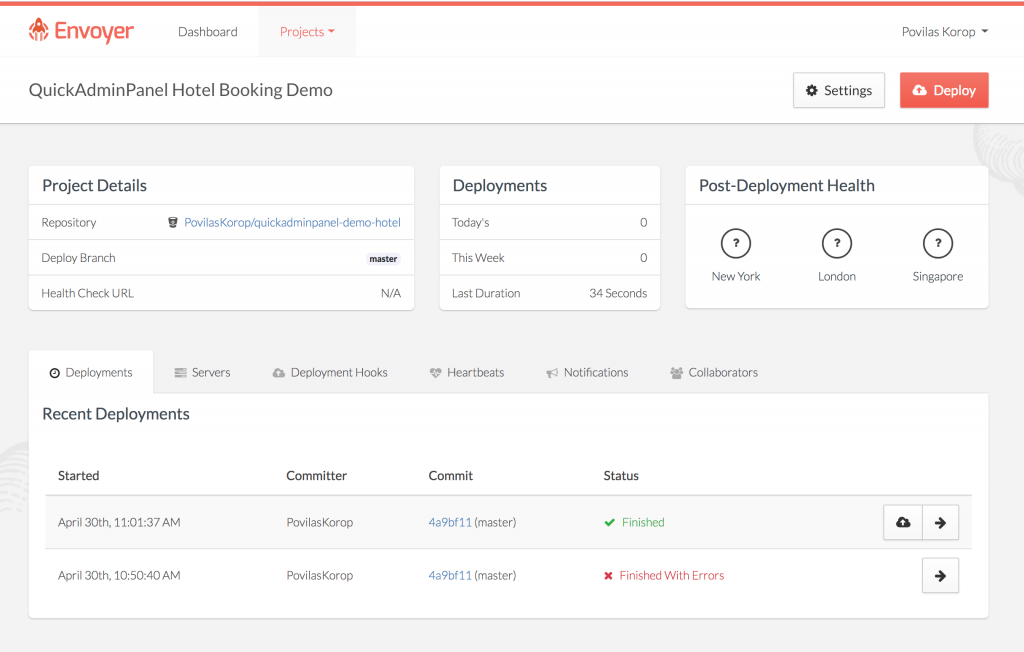 It's not as valuable as Laravel Forge for server provisioning, but if you want to have one-click zero-time deployment, try it out for $10/month.

Let's take one step even further. How do you deploy the changes, while working in a team? And not necessarily sitting in the same office or even working within the same timezone. How do you not break each other's code?

You need to use git branching, here's an example screenshot from my own SourceTree for one of the projects:

There are quite a few options to organize this process, but here's the process I would personally recommend.

Speaking about staging server, this is the one that probably your client will test on to confirm the feature is ready. So you need to prepare a separate environment for it, specifically .env file. Here are the important variables:

Don't leave APP_ENV as "local", it should be different (but not "production"). Also, APP_DEBUG=true means it will show errors with all trace, as it should for testing purposes. But don't forget that on live server it should be strictly APP_DEBUG=false, otherwise you have security issue. Finally, put your server's URL as APP_URL. Simple.

Have a separate database for staging server. Don't ever play around with live data for testing.

Finally, if you have any external services like Stripe, don't forget to put their sandbox/testing credentials in .env file. Or, for email sending, you can use a separate driver and service like Mailtrap.

Kind of a separate "advanced" topic of deployment is you may want to run automated tests on a separate testing server. You can set it up manually or use tools like GitHub Actions.

There are many ways how developers set it up and configure, but short version will be this:

Here's example automated check by Github Actions in our Pull Request on Github:

In ideal scenario, which is called Continuous Integration, everything is automatic - developers just commit their code, and system informs the team if some tests fail.

But it can be done in more simple and manual way - just have basic automatic tests and run them manually by typing php artisan test on your staging server. Just don't forget to prepare the database for it - with seeders and fake data (recommended) or some testing semi-real data (be REALLY careful about it).

So here it is, I have described deployment process for Laravel (but most of it is applicable for other frameworks/languages, too). But even in this big article I haven't touched some topics that may help to make this even smoother. So I'm leaving these for you to explore:

I guess that's it. I wish you more success messages like the one above :)

Again, please take this article as advice for "typical scenario" but keep in mind there are dozens of other ways to deploy projects, and you may here different tips and processes from other teams. Come up with your own process that is suitable for you!